The Detroit Huster is out looking for dark rooms with stacks of speakers that want to put out the right kind of music - the kind that frees your body. Come experience audiophile sound you can feel in your bones in the final home to the Music Institute with DJs doing it on that caliber today, all night long, all the way til dawn, bending genres and taking you beyond - the art of the DJ, highlighted with an extended set from our special guest from Berlin: Prosumer. If you could imagine Ken Collier, D Wynn, and Mike Servito fused into one body mind, than this might just change your life.

Prosumer (aka Achim Brandenburg) is a master DJ from Berlin with a pedigree that includes buyer at Hardwax and defining resident of Panorama Bar, who records and mixes on OstGut Ton and Playhouse. What genre? I encourage you to listen to his SoundCloud links, as his mixes defy genre, the same way the Detroit greats defy genre. It's house, techno, disco - deep sound system music played with a true understanding of the art of the DJ.

In the words of Bryan from Bunker:

"Prosumer simply GETS the art of DJing in a way that very few people ever have or will. Expect a skillful, emotional, perfectly programmed set full of some of the best house and techno you’ve ever heard. He’s the kind of guy who will expertly read the crowd and give the party exactly what it needs at any given moment."

Scott Zacharias is musically ambidextrous, the co-founder of both Detroit's Macho City and Disco/Secret with Mike Trombley, and the original resident of Oslo. He started in thrash bands as a teenager then moved on to space rock project Monaural before his interests in Jazz ultimately led him to the traditions of Detroit's deep house DJs, and then beyond into a truly expansive almost psychedelic take on Disco and all its weird friends. He has blossomed into Detroit's best kept secret, a true student of freeform dance music. Starting around 5AM Scott will perform a Sleaze set, a special kind of lowtempo disco championed in leather bars in the late 70s, usually played in a euphoric post coitus way, deeply lost in the groove.

More than a myth, Gay Marvine (aka Chuck Hampton) is a life long fan of great music, great dance music especially. Having been a skilled DJ for decades (studying the greats and becoming one) gives Gay Marvine a unique perspective into music. Being of Midwestern blood he hears and feels the music in a direct way and shapes everything he touches into the sound of the early cutting-edge Detroit DJs and the music they played, reimagined with the technology available today. With the world at his digital finger tips he can take the raw essence of even the most overheard radio mix of a song and emerge with raw hypnotizing juice. His records are edits and recontextualizations, but just as records are physical relics of a bigger movement or thought, Gay Marvine's records are totems of what DJs actually do in their sets, somehow a document of how a DJ hears music and what a DJ does. Look out for his new record on Bath House Etiquette...

The Fantasy like to imagine their favorite songs, be they soul, krautrock, disco or psychadelic, recontextualized to play as Sound System Music, with the frequencies and feelings we search for in a party like this. Hypnotic. It is like a night club time machine with access to the multitracks. 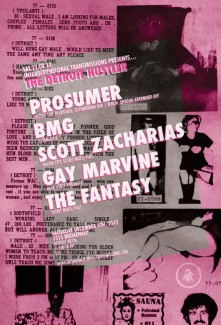