Interdimensional Transmissions and The Bunker present…

No Way Back is not a festival, it is not an event - it is a party. What began in an abandoned Detroit building with a leaky roof and an audiophile sound system has now moved to the entirely legal (the bar goes til 2 and reopens at 7) historic Tangent Gallery. Bounded by Grand Blvd, Oakland, Milwaukee and the last remaining part of Hastings Street, the venue could not be more in the center of Detroit music history. From the endless boogie of John Lee Hooker and his ground breaking 1948 anthem “Boogie Chillen’” where he sings about partying on Hastings Street, to the Apex Bar only a few blocks away on Oakland where he performed live regularly, to Motown’s Hitsville USA which is only minutes away. We all raved in the former warehouses and factories on Hastings Street in the 90s, the Tangent even housed the famous Tryptophan Rave with Jeff Mills & Derrick May on Thanksgiving where the overly stuffed crowd could only sway and wobble. Now the area is only blocks from Submerge, Planet E and Sound Signature’s home base. This year we take No Way Back even deeper into the real Detroit.

If you don't understand the touchstones of this party, it might be impossible to explain. It is a comment on a continuum. For many of us it began in the 90s, searching through fliers at Record Time, calling info lines and buying your ticket at Zoot's only to get lost trying to find that elusive warehouse. What was inside? Something amazing...

This is our generation returning to the source, feeling a freedom and a heat within the music that resulted in speaker fucking. Every generation experiences this without the aid of a night club time machine, whether it was at The Loft, Better Days, The Gallery, The Warehouse, The Shrine, Cosmic, Luomos, The Muzic Box, The Hacienda, Medusa's, The Music Institute, or Berghain. You might not even know that you have soul until you experience being totally lost in the mind control music and realize there is no way back.

Every DJ chosen to play at No Way Back is a master of their medium, so deep in it that they all serve as constant inspirations. This is a celebration of the lost art of the late night Midwestern DJ. This is what makes the collaboration between Interdimensional Transmissions and The Bunker so effortless, as they are both eternal champions of this. 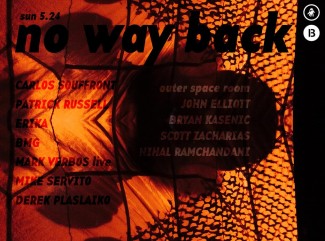