The Come Down Room:

We feel closer to our I.T. family than ever because we share their vision of getting lost in the sound, as well as overlaps between our crews' resident DJs, label artists, and key collaborators. After co-presenting 8 editions of No Way Back in Detroit, and 7 editions in Brooklyn over the last decade, in 2016 The Bunker and Interdimensional Transmissions started a new tradition of throwing The Bunker on Memorial Day at Tangent gallery. This year is extra special as we celebrate 15 Years of The Bunker, one of many such parties happening worldwide throughout 2018.

Embracing the concept of collaboration, we're featuring a series of specially curated DJ pairings in The Dance Room. Opening The Dance Room we have The Bunker residents Mike Servito and Bryan Kasenic, presenting their first b2b set in North America. After having a blast playing an off the cuff 3 hour b2b set after the police were paid off and the lights were supposed to come on at the 15 Years of The Bunker party in Mumbai in January, they are excited to recreate some of that energy in their beloved Detroit. Function and Adam X present a very rare and special set, going back to their Brooklyn roots, presenting house, electro, and proto-techno jams from ‘88 to ‘91 that inspired them as very young DJs. When we heard the recording of the session when Jane Fitz invited The Bunker resident Eric Cloutier to play an all night b2b vinyl only set at her residency in London last year, we knew we had to bring them to Detroit to play together. Their trippy dark layered grooves will provide the perfect soundtrack for the last people standing on Monday night for their closing set.

We are trying something different in the front room of Tangent this year, renamed The Come Down Room. If you need a rest from The Dance Room or simply don't have the physical energy left after the crazy weekend to shake it on Monday night, we got you! The sound of The Come Down Room will be deeply psychedelic. Not quite beatless ambient music, but not really pushing the dance floor either, exploring the mind via incredibly strange music. We'll be exploring the more downtempo and straight up demented side of The Bunker, the stuff that falls between the cracks of boring genre distinctions. There will be plenty of seating and the amazing sound system Tangent is known for on Memorial Day weekend, so sprawl out with your friends and get weird with us.

In The Come Down room we're presenting live sets from The Bunker NY label family: Gunnar Haslam, Clay Wilson & rrao, and Abby Echiverri, all of whom had tracks on the 15 Years of The Bunker compilation released in February. GH is of course known worldwide for his albums on L.I.E.S. and The Bunker New York, his collaboration with Tin Man as Romans, his new label Kavalanic Languages, and is no stranger to non-techno zones, or honestly stretching the idea of what techno can be. Clay Wilson and rrao have only performed publicly together a couple times, but they've been deep in their Brooklyn studio working on a new EP for The Bunker NY in addition to both of their head-spinning solo productions. Abby Echiverri has been gaining notoriety for her indescribable live sets in Brooklyn, and will catch the ears of many more worldwide when her debut EP drops on The Bunker NY in June. A professional sound engineer with a love of modulars and building her own instruments, she has created a completely unique sound.

Aside from these live sets we welcome two of our favorite DJs who see right through genre-distinctions and strive towards wtf moments created from the incredible depths of their record collections, Chicago's Beau Wanzer and Brooklyn by way of Detroit's Stallone The Reducer to anchor this room. Beau Wanzer is already a legendary left field musician with his own sublabel on L.I.E.S., releases on Dark Entries and Jealous God, releases on Nation, and a member of Mutant Beat Dance, his pedigree is perfect to deliver the strangest and most compelling music. Joining him in rotating DJ sets will be Stallone the Reducer, with new music out on FIT sublabel Est. 83', a history on Ersatz Audio with Tamion 12 Inch and playing guitar in ADULT., he has some of the best weird music out there. Prepare to lose yourself in The Come Down Room. 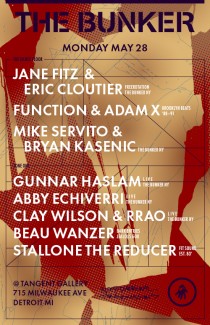